When The New York Times calls the course “..a worseness so extreme that you occasionally wonder if it’s not ironic.“, the locals started calling it the worst course in America. With soil so wet, it’s a surprise the entire area wasn’t classified as wetland. With both an adjacent junk yard and a steel building industrial complex, aesthetics is not Bristol Golf Club’s strong selling point. Geese seem to be the most popular visitors, judging by the look of the course’s natural fertilizer.

Seeing an opportunity, the Town of Bristol, who leases to a management company, assembled a group of interested stakeholders from Save Bristol Harbor, Save the Bay, RIDEM, and the Town administration, among others. Utilizing several grant awards and matching funds, Tim was able to put together a project that addressed many of the course issues. Though he wished he could do more about the inherently unique aesthetic, through the master plan process, he developed a nine-hole par-three course that eliminated the awkward holes. The plan also eliminated the wall-to-wall mown turf, and created sinuous swales to move stormwater more efficiently and help dry the soil, capturing stormwater, filtering it, and re-purposing it for irrigation. With player needs in mind, especially in a scenario in which many of the players will be less accomplished, he chose plantings with native species that did not hinder visibility. Planting locations also created habitat for songbirds and pollinators, while also being unfriendly to geese. 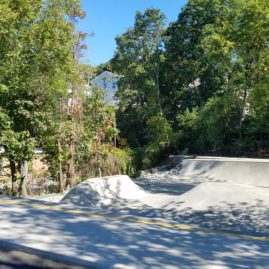